Considering that I hail from Upstate New York (farther north than most might deem necessary to travel), I love when a worthy trend makes its way south. And rarely do I think that Manhattan or its great, neighboring borough, Brooklyn, lack for very much of anything. Especially restaurants. But when the Syracuse-based Dinosaur Bar-B-Que announced plans to open a new outpost in a long neglected warehouse on Union Street near Fourth Avenue, I began counting down the days.

**Disclaimer: This post is long overdue and the following photos date back to June 21st, two days after the Dino’s official opening. But I don’t think it’s ever too late to extoll the virtues of this place.

One of my favorite characteristics of all the Dinosaur Bar-B-Que locations is the way they manage to keep their cool by taking root on the slightly tougher edges of town. In Syracuse, the original location was founded in 1988 in an old brick tavern on a largely uninhabited stretch of town. In Brooklyn, the bar-b-que joint is steps from the Gowanus Canal, whose toxicity has long been debated, and has showcased a bright mural as a tribute to the area’s gritty history. The same sentiment can be found in Harlem’s location, too. 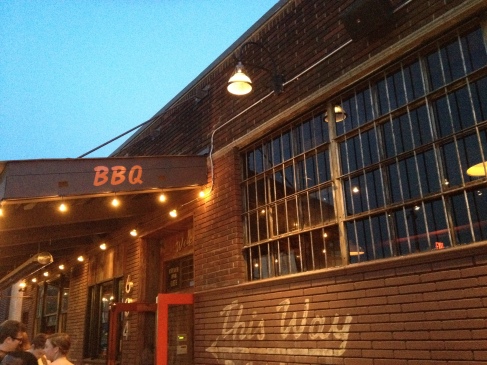 Although I most certainly am no expert in the intricacies of bar-b-queing, I can assure you that this is the best I’ve ever eaten.

While patiently waiting for our table with a slew of expectant and hungry Brooklynites, I ruminated on some of the many differences between each location. For instance, Syracuse’s curb is always lined with Harley-Davidson bikes while Brooklyn’s curb is more typically filled with strollers and vintage Schwinn bikes. But the food is another story. The food will consistently amaze you, despite the location you choose.

Fuel for the fire.

Unfortunately, piles of meat rarely photograph well. At least, in my experience. And, after a lengthy and well-deserved wait with some frothy brews, very little thought was given to the camera once the food arrived. But hopefully I’ve convinced you that this place is well worth a visit.

Over the past few weeks, I’ve managed to catch delicious whiffs of slowly cooking pork as I’ve biked over the Gowanus canal on neighboring streets. And trust me, pork is quite the upgrade from the foul smells typically emanating out of that canal.

Sail Away to Fancy